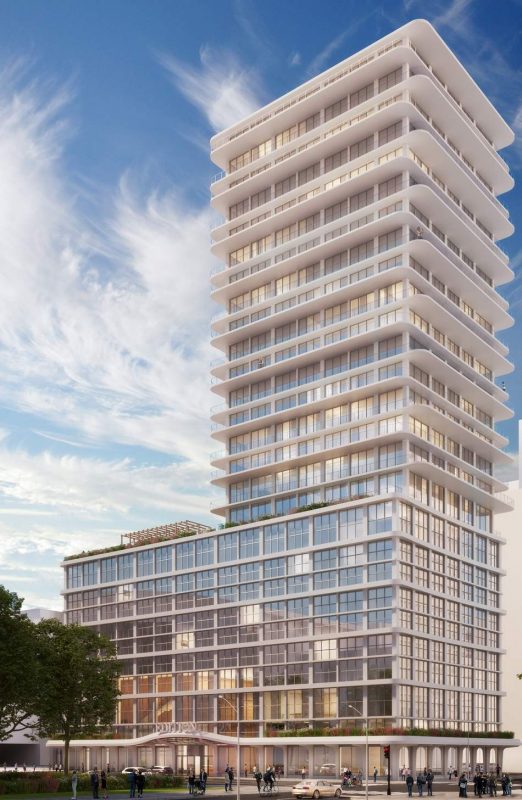 The $3 billion Water Street Tampa said Thursday it will develop the city’s first hotel-branded condominiums with The Residences at the Tampa Edition.

The 46 condominiums will occupy the top 15 floors of a 26-story tower with a 173-room Marriott Edition luxury hotel at its base.

Construction on the Edition hotel and condominiums, located at the northwest corner of Channelside Drive and Water Street, across the street from Amalie Arena, is expected to begin in early 2019 with sales launching in early 2020 and an opening in the spring of 2021.

Like the Edition hotel, the condos are being created through a partnership between Marriott International and hotelier Ian Schrager, known for his extravagant and bohemian makeover of New York City’s Grammercy Park Hotel.

Along with similar residences in Miami Beach and West Hollywood in Los Angeles, the Tampa project will be the third such set of Edition-branded residences in the United States. An SPP spokeswoman declined to discuss potential sales prices, but in Miami Beach — granted, a pricier market — Edition condos for sale Thursday started at $1.65 million and went up to $8.9 million for a 5,200-square-foot unit.

In Tampa, each condo will include a private terrace with views of the Tampa skyline and Hillsborough Bay. Owners will have access to the hotel’s rooftop pool, spa and fitness center, as well as its rooftop bar and ground-floor restaurants.

The project is being designed by New York architect Morris Adjmi in collaboration with the Florida firm Nichols Brosch Wurst Wolfe & Associates, with Roman & Williams doing the interiors. The sales agent will be Smith & Associates of Tampa.

SPP plans to start construction of 10 buildings at Water Street Tampa over the next year. They include three office projects, apartment buildings and condominium towers encompassing 1,500 residences, a grocery store a block away from the Edition, a gym, and about 50 stores and restaurants. That’s about 3.5 million square feet of development in the first phase of the project, which is expected to be complete in late 2021.

In addition, Channelside Bay Plaza is being re-worked as a mixed-use project, Sparkman Wharf, with offices, a 1-acre lawn and a 9-restaurant outdoor food hall.

Water Street also will include a new University of South Florida medical school building, which is already under construction, and a new home for the Museum of Science and Industry.