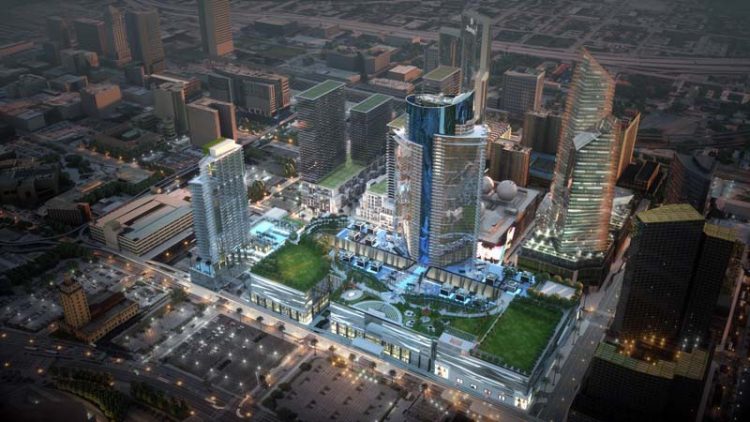 Miami Worldcenter, the second largest urban project in the United States, is projected to be nearly complete by 2021, according to a press release from Miami Worldcenter. The enormous 27-acre, 10-block, $2 billion multi-use development in downtown Miami is well under construction already, with over 800 workers on the job site every day.

The first phase to be completed will be Caoba Apartments. The residential building, including 444 units, could be finished by the end of 2018 and open to tenants, according to a press release. It will be adjacent to the Brightline Miami Central station.

Paramount Miami Worldcenter is an even larger residential tower in the pipeline to be completed by the first quarter of 2019. It is already well under construction, with about 48 floors of 60 already done. Paramount will include 569 units.

The Forbes Company and Taubman worked with Miami Worldcenter to develop this aspect of the project, along with about 10 architects to give the project a natural look.

“We did not want this project to feel like Disney World. We wanted it to be a true urban fabric,” said Nitin Motwani, managing principal for Miami Worldcenter Associates. “We opted to have different architects for different buildings so they all shared in the design quality but all had their own experience so aesthetically it feels like a real city. So far it has worked out really well.”

A Marriott hotel is also included in the 27 acres. The developer, MDM group, plans on breaking ground on the 1,700-room Marriott Marquis at the end of this year. The hotel is to include 500,000 square feet of meeting and event space and an 80,000-square-foot outdoor event deck. A smaller boutique hotel, called citizenM, will also open a 348-room establishment within Miami Worldcenter.

Luma, the third residential tower, will likely be one of the last components to be completed. The luxury apartment tower, developed by Zom, will only have 434 units. Construction is expected to begin this year with completion around 2020.

The last component of the project to be completed is to be a mixed-use office tower. Developed by Hines, the construction could start as early as 2019 and be completed around 2021.

The Miami Worldcenter project will change downtown Miami significantly, becoming “a city within a city,” according to Mr. Motwani’s vision. It has already had an impact on the job market and infrastructure in Miami, with 4,000 hires so far, 75% of them from Miami-Dade County, according to a press release. Overall, the project is also bringing $100 million in privately-funded infrastructure upgrades.

“We are sitting at a confluence of arts, culture, entertainment and education. Obviously, we are looking forward to Brightline’s continued growth as well as Tri-Rail, and we are looking forward to continued enhancements to the Metrorail including new trains,” Mr. Motwani said. “We are improving two of the stations that touch our property. We are creating pedestrian-friendly streets and sidewalks as well as bike lanes. We’re trying to give all forms of transportation ease of access into and out of Miami Worldcenter.”

Source: “Miami Worldcenter expected to near completion by 2021,” Miami Today