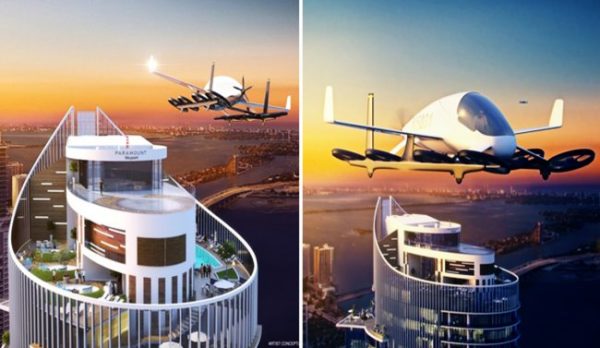 Jetsons-style living might become a reality sooner than we think. At Paramount Miami Worldcenter, developer Dan Kodsi is working to make the luxury high-rise compatible for passenger drones – a.k.a. flying cars. He’s modifying the rooftop’s design to fit a 5,000-square-foot skyport on top of the 60-story, 530-unit tower.

Residents would be able to land on top of the building in vertical takeoff and landing vehicles, enter Paramount through a sky lobby and ride down to their unit in a glass-enclosed elevator.

Kodsi got the idea for the futuristic amenity after reading about Uber Elevate, Uber Technologies’ planned VTOL ride-sharing network, which would begin in Dallas, Los Angeles and Dubai after 2020. The “flying car” space is still lacking regulation and air traffic control.

“Being a developer you want to see where the trends are heading and stay ahead of them,” Kodsi said.

He expects it would be 10 to 15 years before flying cars reach Miami, long after the building is completed and the space is owned by the condo association.

Kodsi is co-developing Paramount with Worldcenter developers Art Falcone and Nitin Motwani. Construction is on the 47th floor and is expected to be completed in about a year. The tower is about 75 percent pre-sold, he said.

“I really truly believe the skyport will be the future train station,” Kodsi added. “Why not buy in a building that has the potential to be in line where transportation is heading?”

Source: “If flying cars ever become a thing, Miami Worldcenter will be ready,” The Real Deal Miami