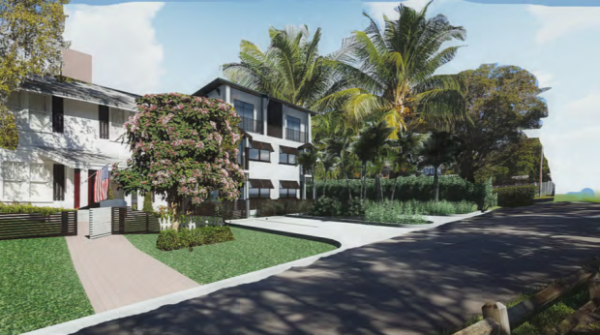 A new residential development could be coming to Fort Lauderdale’s Sailboat Bend, the city’s only historically designated residential neighborhood.

A pair of historic buildings on the site — a two-story private residence and a 590-square-foot accessory cottage at the back of the property — will be left intact as part of the plan.

Merrilyn Rathbun, research director at the Fort Lauderdale Historical Society, told The Real Deal that those structures are typical of the early days of the neighborhood. Back then it was called Waverly Place.

“It was one of the early developments west of [downtown] Fort Lauderdale,” Rathbun said. “It fell on hard times and there was a lot of infill going in in the ‘60s and ‘70s, which dragged the neighborhood down.”

In 1988, residents approved a neighborhood master plan that included designation as a historic district to preserve the pre-war atmosphere. A number of the 550 buildings were designated as historical, including the two structures to be maintained on the development site.

The two-story home, a chimneyed Mediterranean Revival built in about 1940, is visible from the street. The cottage abuts the alley between Southwest Fourth Street and Las Olas Boulevard.

“There are a lot of these little cottages that they built in the 1920s. They’re plain vernacular or masonry vernacular [style], which are called folk houses,” Rathbun said. “Usually, they were not designed by an architect. Often they were built by the people who lived there.”

The prevalence of the do-it-yourself architecture, coupled with an abundance of native vegetation, has earned Fort Lauderdale’s Sailboat Bend something of a bohemian reputation. The developer hopes to build on the feel of the area.

According to the submittal from the architect, Steven L. Cohen and Associates, the Spanish-style buildings are intended to preserve and enhance the neighborhood’s character with styles similar to those already in the area. A landscaping plan designed by Green Earth Landscape Architecture would keep with the green feeling of the surroundings, including Major William Lauderdale Park across the street.

The project would total 12,752 square feet, which averages out to about 2,125 square feet per home. Residents’ amenities would include private decks and pools and a centrally located courtyard. Residents would also have use of the historic cottage.

Fort Lauderdale’s development review committee will review the plans today. Before receiving final approval, the proposal will be subject to a vote by the Fort Lauderdale Historic Preservation Board.