Development is Booming in Doctor Phillips!

Development is booming in Doctor Phillips, with 17 projects currently in the works

With the amount of undeveloped property still at stake in Dr. Phillips, residents of Southwest Orange County can expect to see new homes, schools, and more in the coming years. Development is booming in Doctor Phillips, and the Orange County Planning Division highlighted the 17 projects currently under way during the recent Dr. Phillips Town Hall.

Alberto Vargas, manager of the Orange County Planning Division, spoke at the Dr. Phillips Town Hall meeting July 7 and presented highlights of upcoming development in the area. Dr. Phillips falls under the southwest sector of the county, and Vargas split the area up into three portions — north, central, and south Dr. Phillips.

Current development highlights in the area include 17 projects, 11 of which are in south Dr. Phillips. The south portion, sandwiched between Interstate 4 and Apopka-Vineland Road, boasts abundant, available land around Lake Ruby and Big Sand Lake.

Under construction now is a project called Ruby Lake, which consists of 236 single family homes surrounding the lake. A preliminary subdivision plan has been approved, and the gated community will include lakefront properties, according to a rendering.

Nearby, off Palm Parkway, a preliminary subdivision plan is under review for the Ruby Lake Townhomes project, which would consist of 132 units. This project cannot move forward until going through the Development Review Committee and Orange County Board of County Commissioners. 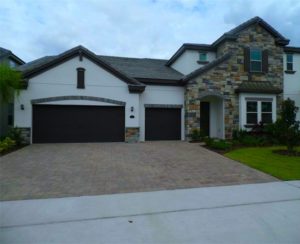 Other subdivision projects in south Doctor Phillips are taking place in the Kerina Parkside community off of Apopka-Vineland and Fenton Street. Developers are looking to add more homes in two more tracts, one with 229 single family units and another with 111.

Off Apopka-Vineland and First Street, a comprehensive plan amendment has been approved for the 10,000-square-foot Goddard School preschool; however, this still requires rezoning. Nearby, off Fourth Street, the Islamic Center of Orlando is looking to expand to include a community center, sports complex, and masjid (a place of worship).

Orange County is also discussing plans for a relief high school for Dr. Phillips and Freedom high schools in the near future. A potential lot off of Fenton Street has been identified, rezoning submitted, and a community meeting held Wednesday, July 27, at Dr. Phillips High.

Additional hotel-room expansions, a dual-brand hotel, and timeshare units are also in the works, most of which have planned-development approval but other roads still to cross.

Aside from the south region, north Doctor Phillips has two residential projects planned, as well as 31,500 square feet of retail, restaurant and office space at The Grove at Isleworth.

Central Doctor Phillips has three residential projects in the works. Currently under construction is the Dellagio subdivision, located off of Via Dellagio Way and Della Drive. Once complete, the neighborhood will feature 83 single family homes.

Off of Turkey Lake Road near Spring Lake, a project called the Majorca is pending annexation into the city of Orlando. This was a proposal to convert commercial entitlements into 325 multi-family units.